Two weeks ago I published details of an attack method that can be used to bypass various implementations of certificate pinning in Android or generally Java applications.

Several applications and frameworks are still vulnerable to the attack, among them every Java or Android application using a version of the popular OkHttp networking library before versions 3.1.2 and 2.7.4. [The OkHttp issue is tracked as CVE-2016-2402] 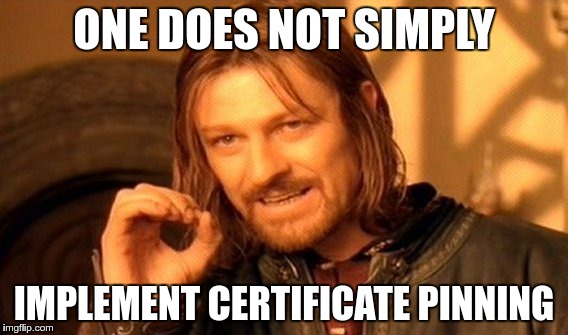 Certificate pinning is a control used to mitigate Man-In-The-Middle attacks by privileged attackers. These attackers are assumed to have access to the private key used to sign a certificate that is trusted by the system hosting the application under attack.

It turns out that certificate pinning - if implemented using certain Java APIs like checkServerTrusted() - without taking extra steps - can be easily bypassed by the same attackers that the control is supposed to protect against. If vulnerable, pinning becomes completely ineffective as a control as it doesn’t do what it sets out to do.

The main reason behind the flaw is that for pinning to work correctly, developers should not check pins against the list of certificates sent by the server. Instead, pins should be checked against the new, ‘clean’ chain that is created during SSL validation.

There has been some confusion over the pre-requirements for such attack. These are:

Under other circumstances, the 2nd prerequisite would be a ‘huge’ one. However that’s not the case here: Certificate pinning, as a control, only makes sense against attackers that already have such access. Applications that implement pinning want to actively protect against such attackers. The described attack enables this attack vector, bypassing the pinning control.

Some confusion may also exist over whether this is a ‘local’ or ‘remote’ attack. The answer is that it can be both. It boils down to the method used by an attacker to obtain the private key of a trusted certificate. Some of these are mentioned in the original post:

If an attacker uses a compromised trusted CA key, the attack can be remote. If an attacker needs to install or somehow trick the user into installing their own malicious CA certificate, then the attack could be local and requires the attacker to ‘phish’ a user.

Say Alice is the client, Bob is the server and Mallory is the intercepting host.

The general idea is:

Here’s a sequence diagram version of the above steps: 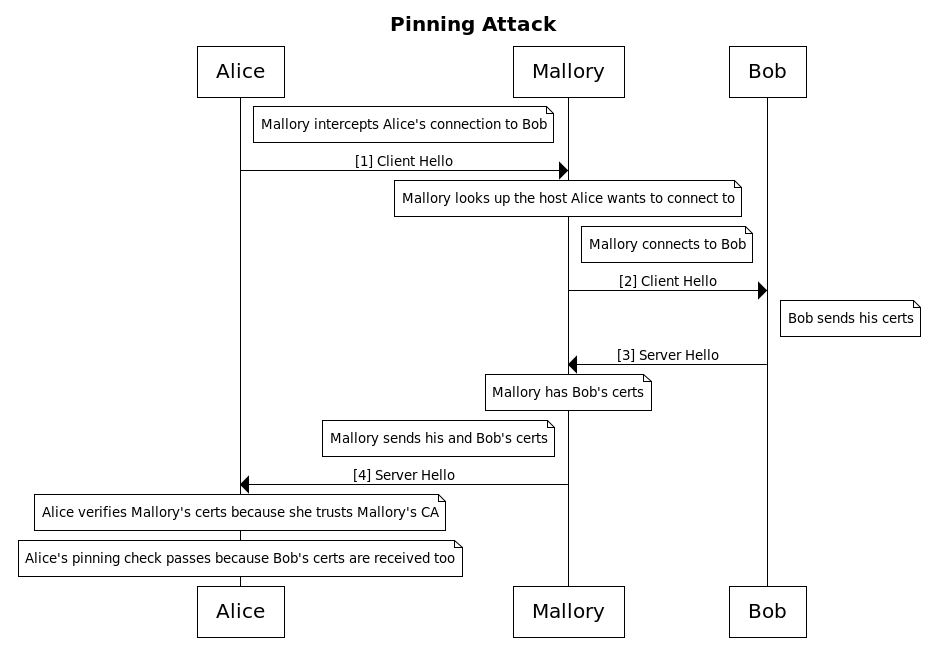 If the above scenario is possible, then an application that claims to perform pinning is vulnerable.

Testing for this can be tricky, because no ready-made tools exist - so I created a few.

While submitting bug reports to OkHttp and several other applications I used a simple python script that acts as a malicious HTTPS web server that masquerades as a specified trusted server. You can find it in my github. Start this server with a command line parameter indicating which trusted server to masquerade as (domain name). Any client connecting to it will receive a certificate chain that looks like the following:

CA A and CA C are trusted by the system.

Of course, for this to work, for POC purposes we have to manually create a ‘CA A’ certificate and insert it in the host system’s trusted store. A real attacker may not have to do this step.

Using this for testing is simple:

An easier way to demonstrate the attack is by making use of a new feature I added to the popular mitmproxy intercepting proxy and was merged a few days ago.

To use this, for now, you’ll have to checkout the master branch (zip). The feature will be part of v0.17 - once that is tagged and released.

While operating in this mode, mitmproxy will automatically add all certificates of the upstream server to the certificate list that is served to the client.

If connections using normal proxying fail (due to pinning) but work in this new mode, then you can easily conclude that the pinning implementation exhibits this flaw.

I created [a sample vulnerable Java app] for demo purposes. Find it in my github. This uses OkHttp 3.0.1 (which is vulnerable to CVE-2016-2402) to connect to github.com and retrieve a file.

Since pinning is used, if you attempt to proxy this app or redirect its connections you shouldn’t be able to see the encrypted traffic as the application will refuse to connect to the proxy - even if the proxy certificate is trusted by the system.

However, because OkHttp 3.0.1 is vulnerable to CVE-2016-2402, you should be able to intercept the traffic if you redirect to the POC malicious server or if you use mitmproxy with the new --add-upstream-certs-to-client-chain option.